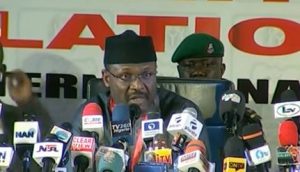 Prof. Mahmood Yakubu has resumed as the new chairman of the Independent National Electoral Commission (INEC) for a second-term.

Yakubu went into a closed-door session with the national commissioners after arriving to a rousing reception by INEC headquarters staff and guests at about 11:20, Vanguard reports.

Speaking at a ceremony to mark the commencement of his second-term, Prof. Yakubu said he had steadily strengthened the institutional capacity of INEC to carry on with its mandate even in the absence of a Chairman.

While handing over the reins of leadership to Yakubu, Muazu, who was acting chairman, congratulated his boss on his reappointment.

He INEC was confronted with several challenges, especially security during the bye-elections, lamenting the loss of six police personnel in Bayelsa State.

Recall that President Muhammadu Buhari had on Wednesday sworn Yakubu for his second-term tenure for five years.

Prof. Yakubu while speaking with State House correspondents after taking his oath of office disclosed that the preparations for the 2023 general elections have started.

He promised that the electoral body would work with the National Assembly to ensure a speedy passage of the amendment to the nation’s Electoral Act in order to attend to electoral issues.