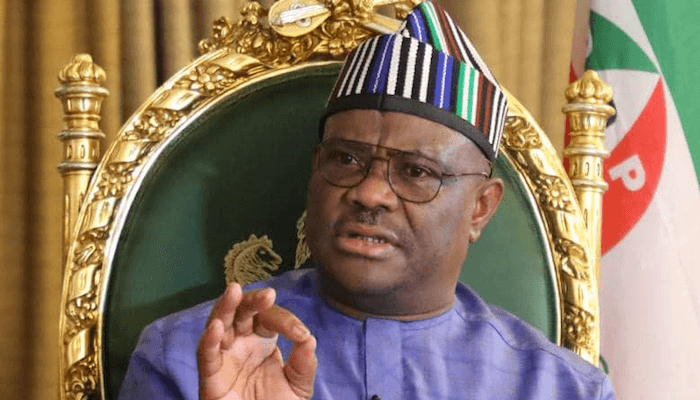 Gov Nyesom Wike of Rivers State has fingered two governors he said were working with the National Working Committee of the Peoples Democratic Party (PDP) to sow what he called seeds of discord in the party instead of capitalising on the alleged failings of the All Progressives Congress-controlled federal government.

Speaking on a television programme in Port Harcourt, Gov Wike accused the NWC of sowing seeds using those he identified as two former governors of Imo and Cross River states and present senator from Benue State.

He also warned that President Mohammadu Buhari integrity would be at stake if he fails to honour invitation of the House of Representatives to address the growing concern about the spate of insecurity across the country.

The outspoken governor said: “PDP ought to have harvested from the inefficiency of the APC; from the maladministration of the APC. Ordinarily, that is what opposition party ought to do. If you ask me, are Nigerians waiting for a change? Yes. If you ask me as a member of PDP, am ready to support PDP to takeover, yes. But, if you ask me currently as it is, is the leadership of the party willing for us to harvest this opportunity for a change, I will say no.”

He went on: “An opposition party that ought to be united, to work, to take over the affairs of government, because people are waiting for this opportunity, but the current leadership of NWC is not prepared for that, rather, what they have done is to constitute some people to sow a seed of discord among governors for their own selfish interest. And that will boomerang; that will consume them.”

Giving details, he described as disingenuous the decision of the NWC to jettison the recommendations of Benue State governor, Samuel Ortom-led committee set up to reconcile the party in Niger and Plateau States, just because of its vested interest in Niger State.

The governor accused the current leadership of NWC of merely being interested in retaining current structure of the party to remain in power, and not to win the 2023 election.

Gov Wike said the level of insecurity leading to deaths, particularly in Borno State and other parts of the country ought to have compelled President Buhari to keep his promise of honouring the invitation by the House of Representatives.

He pointed out that it was APC members who control majority in the National Assembly that moved the motion to invite President to address them on what measures are being taken to tackle and end the spate of violent killings, to which he consented.

Gov Wike took a swipe on some PDP members who just decamped to the APC, describing the two former PDP members, John Bazia and Michael West as slippery characters.

He said the two men who served as Commissioners in his cabinet during his first tenure, became disgruntled because he did not retain them.

He further said: “You knew the position of Chidi Llyod when he was in APC. Ask the former Commissioner of Transport (Michael West), he contested PDP primaries with me and got only three votes, but because of politics of carrying everybody along and the money he spent I decided to accommodate him. He was Commissioner of Transport. Ask him his contribution to the administration.”

The governor accused one of the decampees of diverting government money while serving as a commissioner. “I called the commissioner and asked him of his whereabouts. He told me he was in Calabar to see his father, the Olumolumba. I was amazed, and said; you took our 13 buses to Calabar without permission. I would have sacked him that day. People prevailed on me to manage him till after the election.

“Taskforces were collecting money and paying into the Commissioner’s private accounts.

Speaking on another decampee and former commissioner, Gov Wike revealed that while serving in the State executive council, the man caused him so much embarrassment.

“During the 2015 presidential campaign, the President brought ‘kola’ to the Traditional Rulers. You can’t believe what happened. The Chairman of Rivers State Traditional Rulers Council called me that the chiefs are waiting for their kola. I was amazed and said which kola, you have not received it? They said no. The then commissioner of Information who was the chairman of the sub committee of our campaign said they gave the kola to him . Do you know what he did ? He took 80 per cent and brought 20 percent of the kola to the traditional rulers.

“The then Commissioner of Information got angry and slapped him and called him armed robber. Everybody was angry and compelled him to bring the kola. What an embarrassment.”

Gov Wike also narrated how he had to personally intervene and pay off 40,000Euro debt the man was owing. He explained that his administration has done several projects in both Tai and Asari-Toru LGAS where the two decamped Commissioners hail from.