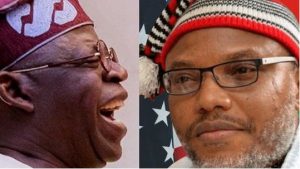 The leader of the Indigenous People of Biafra (IPOB), Nnamdi Kanu, has described those who claim that APC national leader, Bola Tinubu, is 69 years are liars.

Naija News reports that Tinubu on Monday held a colloquium to celebrate his 69th birthday in Kano State.

Sharing a page allegedly from Wikipedia which puts Tinubu’s age at over 70 years, the IPOB leader described Nigeria as a cursed country.

He slammed the handlers of the former Lagos State governor for forgetting to edit his Wikipedia page before his (Tinubu) birthday celebration.

Nnamdi Kanu wrote: “Congenital, unrepentant liars! They forgot to change his date of birth on Wikipedia before announcing his 69th birthday.

Congenital, unrepentant liars! They forgot to change his date of birth on Wikipedia before announcing his 69th birthday. Shameless generation of unconscionable thieves. #Nigeria is cursed. pic.twitter.com/qBavXFsXdV

Checks by this online newspaper show that Tinubu age on his Wikipedia page is 69 – born 29 March 1952.

However, it is important to note that Wikipedia pages are not authentic sources of information as they can be edited by anyone.

Meanwhile, Bola Tinubu has urged the Federal Government to recruit at least 50 million youths into the Nigerian Army to help tackle insecurity.

According to the former Lagos governor, recruiting youths into the army will boost Nigeria’s fight against terrorism.

“We are under-policed and we are competing with armed robbers and bandits to recruit from the youths who are unemployed. Recruit 50 million youths into the army and take away from their recruitment source, what they will eat cassava, corn, will grow here,” Tinubu said.