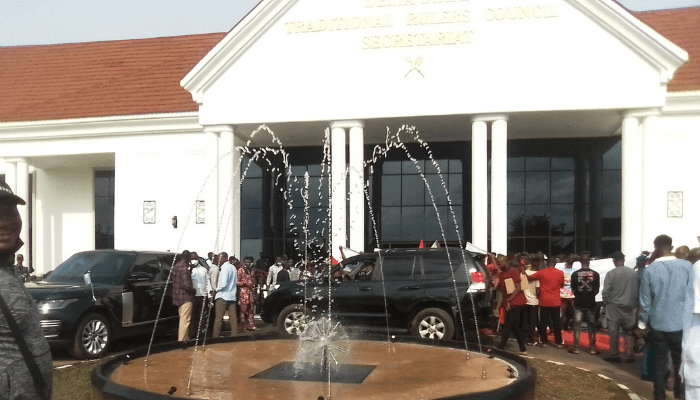 Sokoto State Governor Aminu Tambuwal on Wednesday commissioned the newly constructed Delta State Council of Traditional Rulers’ Secretariat in Asaba, with a call for the traditional institution to be given the rightful place it deserves in the federal constitution.

Tambuwal said he was overwhelmed by the magnificent edifice constructed for the council by the Ifeanyi Okowa-led administration in Delta State.

“We (political leaders) place high premium on this institution and we believe that we must do everything humanly possible to preserve the institution; not only to preserve it in Nigeria but to give it the rightful place it deserves,” Tambuwal said.

“We at the Northern Governors’ Forum have agreed to initiate a process and support a constitutional amendment that will give the traditional rulers a place of pride in the affairs of running the government.

“I, therefore, seek the support and cooperation of our Southern brothers to support this initiative through the National Assembly and various states’ Houses of Assembly so that we can establish and re-enact that position of priority to the traditional institution, and recognition, so they can continue to serve our people well,” he said.

Tambuwal commended the traditional rulers for their collective roles in advising the political leaders on matters of development and challenges of insecurity.

“We appreciate your intervention because even in the military regime, they rely on traditional institutions, how much more those of us that derive our legitimacy from the people that you reign over?” he said.

In his speech, Governor Okowa recalled that the location the council’s secretariat was initially built used to be flooded, with small houses and difficult terrain causing them to hold their meetings at the Unity Hall of the Government House, Asaba.

“But today, all that has changed as they now have a befitting place to hold their meetings,” he said, adding that they deserve the magnificent edifice as their council secretariat because of their contributions to the peace and unity of the state.

His Royal Majesty, E. O. Efeizomor 11, Obi of Owa, chairman, Delta State Council of Traditional Rulers, thanked Governor Okowa for the gesture and said that they have resolved to do better than they had done.