South-West: There Will Be No Real Winner In PDP Congress – Doyin Okupe 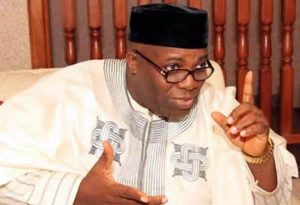 Former presidential aide, Doyin Okupe, on Sunday said the outcome of the zonal congress of the Peoples Democratic Party in the South-West will not be productive and will affect the party in the region.

Recall that the main opposition party changed the venue of its zonal congress from Ibadan to Osogbo, Osun State.

The effort of the reconciliation committee led by the former Senate President, Bukola Saraki, to solve the differences between the Governor of Oyo State, Seyi Makinde and former Governor of Ekiti state, Ayo Fayose, has yielded no result.

Okupe while speaking on the issue in the region said neither Fayose nor Makinde is qualified to lead the party in the zone.

Okupe, in a series of tweets, also predicted that there’ll be no ‘real winners’ in the zonal congress.

“The final Straw. The die is cast and barring a Divine intervention, an amicable settlement between Governor Makinde and former governor Fayose, is an impossibility. Several attempts have been made by leaders and elders at the zonal level.

“Efforts were also made directly by the national secretariat and indirectly by the indefatigable Bukola Saraki’s reconciliation committee. All to know avail. This in itself is a strange phenomenon.

“The doctrine I learnt in my 40yrs sojourn in politics is that … no matter the problem between two or more groups, as long as the problem is strictly political, it is resolvable through consultation, negotiation and compromise..

“The working tools of an astute politician are: oratory, ability to communicate and convince others effectively, negotiating skill, readiness to arrive at a compromise, wisdom, tact, flexibility, patience and a benevolent spirit. NOT confrontation and rigidity or obduracy.

“Strangely in Yoruba land, even issues of infidelity and adultery, which are very touchy and extremely trying, are discussed and settled between husbands, wives and offending partners!!!

“Governor Seyi Makinde and Fayose are contending the leadership of the party in the southwest. A position which neither of them is qualified to hold, but for aberrant development in our polity.

“It was former President Obasanjo, who because he did not want his administration to be bogged down with petty issues from the states, empowered the state governors to be leaders of the party in their respective states and zones.

“This was a privilege enjoyed by former governor Fayose to the fullest in his time. And until the proviso is annulled Governor Makinde ought to have the honour of being the official leader of the party in the SW currently. This “proviso” though an obvious absurdity, still stands.

“I call it an absurdity because it will be unthinkable for example, for a Governor Sanwo-Olu of Lagos to say he is leader of APC in Lagos, official or unofficial. But let’s rest this argument here..

“As for governor Makinde, his attempts to destabilise establish state party structures in order to establish his control and leadership, is wrong and this has created unnecessary enemies for him within the zone even among those who were not opposed to his leadership.

“In tomorrow’s congress, there will be no real winners. The outcome of tomorrow’s congress will cause a permanent schism in the SW PDP which may seriously affect the future of the party adversely in the zone in the nearest future.

“We as a people always refuse to learn from history. The dichotomy and lack of consensus in Yoruba land today can be traced to the sowing of the seed of discord during the Awolowo/Akintola conflict.

“But those who fail to learn from history will themselves become lessons in history. And as the saying goes “those who the gods must destroy, will firstly be made mad.” THOSE WHO HAVE EARS LET THEM HEAR.”