South-West PDP zonal congress: We are shocked at your utterances – Makinde’s aide tells Fayose, others 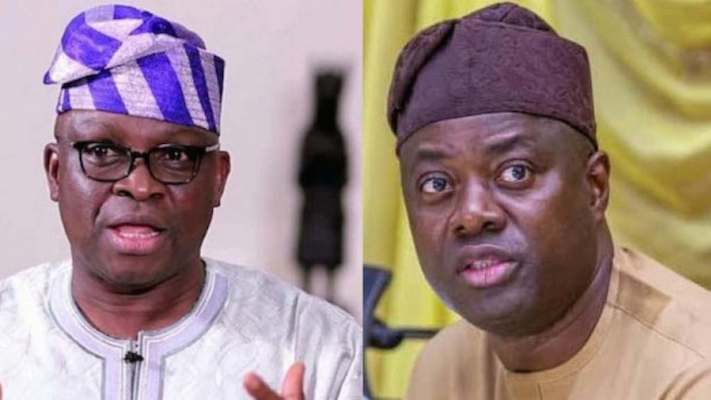 Former governor of Ekiti State, Peter Ayodele Fayose has been cautioned against making unguarded statements and spreading falsehood against the person of the Oyo State Governor, ‘Seyi Makinde, over the just-concluded South-West PDP zonal congress held in Osogbo.

The former governor, and a zonal chairmanship candidate, Eddy Eniola Olafeso, who earlier promised to abide by the outcome of the congress, have been quoted in the media making contrary statements in the past few days.

A statement by Taiwo Adisa, chief press secretary to Governor Makinde, however, admonished the former governor and other leaders on the need to stand by the truth, be men of their words and give the necessary support to the new zonal chairman of the party, Taofeek Arapaja.

“We implore all stakeholders in the South-West PDP to accept the outcome of the Osogbo congress in good faith and join hands with other leaders to build a virile party that is ready to return the glory of the PDP in the zone,” the statement read in part.

The statement noted that Governor Makinde had already regarded the Osogbo zonal congress as a family matter, having declared that there would be neither a victor nor a vanquished, warning that Fayose and others should not take that liberty to blackmail him.

Adisa maintained that Governor Makinde remains open to the idea of collaborating and cooperating with all leaders to rebuild the PDP in the South-West zone, with a view to turning it into a winning party again.

The statement comes on the heels of press interviews by former Governor Fayose and Olafeso, which presented some distorted versions of the outcome of the Osogbo congress.

It added that it was unfair for any stakeholder to go to a national television to attack Makinde and impugn the integrity of the peaceful and transparent congress.

According to the governor’s aide, the allegations by Fayose and especially his reference to Governor Makinde as being ‘quiet but deadly’ were baseless, made in bad faith and should be discountenanced by all well-meaning individuals.

He also stated that it appears that those raising unfounded issues against the congress might be smarting from “failing in an art they thought they had perfected.”

The statement added that the orchestrated media blitzkrieg against Makinde is a misguided and untoward development, adding that those involved should desist from trying to tarnish the governor’s image.

The governor’s aide wondered why the former Ekiti governor, Olafeso and others are trying to impugn the integrity of the peaceful, transparent and fair congress, by citing developments unconnected with the congress.

He noted that the claim that some members of a Road Transport Union followed Governor Makinde to Osogbo was spurious and puerile.

Adisa added that the governor is a peace-loving man and that he should not be accused of something he knew nothing about.

He stated that any individual could have found his/her way to Osogbo and claim to have been in the governor’s convoy but that such claim should not be taken as sacred.

The media aide further wondered why despite the claims by Fayose and Olafeso, there was not a single case of violence or arrest of anyone loyal to Governor Makinde at the congress.

Adisa added that if some individuals decided to explore their freedom of movement and expression by travelling to Osogbo for sight-seeing and then made a video, which is deemed offensive, Fayose should have reported to the appropriate authorities instead of seeking to defame the character of Governor Makinde.

“The South-West PDP zonal congress held in Osogbo has come and gone and there is no doubt that it will go down the history lane as one of the most peaceful PDP congresses in the zone.

“The peaceful conduct of that congress, one must say, followed the body language and actions of the leader of the party in the zone, Governor Makinde, a man renowned for being a peaceful politician.

“Despite the desperation and provocations from the Fayose camp, the governor maintained his calm and guided the zone to a peaceful congress that has now produced worthy leaders for the party.

“The governor made it clear from the outset that the congress was about rebuilding and strengthening the South-West PDP and he worked hard to ensure that the party puts its best forward, as, according to him, whatever happened in that congress had ramifications for the national polity.”

It further stated that, “Governor Makinde had equally described the congress as a family affair, promising to work with anyone who emerged winner, with the climax of the Monday, April 12, 2021, event being the eventual acceptance of Governor Makinde as the leader of the South-West PDP by former Governor of Ekiti State, Ayodele Fayose.

“One is, therefore, surprised that less than 48 hours after that acceptance and the commitment to work with Governor Makinde to build the party, the former governor is masterminding an assault against Governor Makinde over the peaceful congress in which the latter made it clear that there would be ‘no victor, no vanquished’.

“One can see the ungodly pattern Makinde’s critics are following by trying to build a false narrative around the congress with a view to rubbishing it.

“It should, therefore, come as a surprise to the public that the same camp that claimed that it had conceded defeat and was ready to work with Arapaja, is now engaging in media warfare against the governor.”

The statement from the governor’s aide also said: “In the morning of Wednesday, Eddy Olafeso was on national TV to lay the foundation for what would be a sustained effort to tarnish the image of the governor. By evening, the cycle was completed by Fayose, who also appeared on the same medium.

“This has proven that false alarm and deliberate falsehood are being deployed to rubbish an otherwise peaceful congress.

“While we would not like to join issues with Fayose and those who contested against Arapaja, over the outcome of the congress, we would like to caution that no one should attempt to impugn the personality of Governor Makinde, a peace-loving individual, who has never got anything by violence. The peaceful conduct of his campaign while running for office as governor of Oyo State is an attestation to this fact.

“Therefore, going on air to say that Governor Makinde is ‘quiet but deadly’ is not only unstatesmanlike, it is also unguarded, malicious and wicked. We make bold to say that while those who lost the election at the congress are allowed to rue their loss despite the assurance by Governor Makinde that there will be no winner or loser, it is expedient that they guard their utterances and avoid any descent into the gutter.”