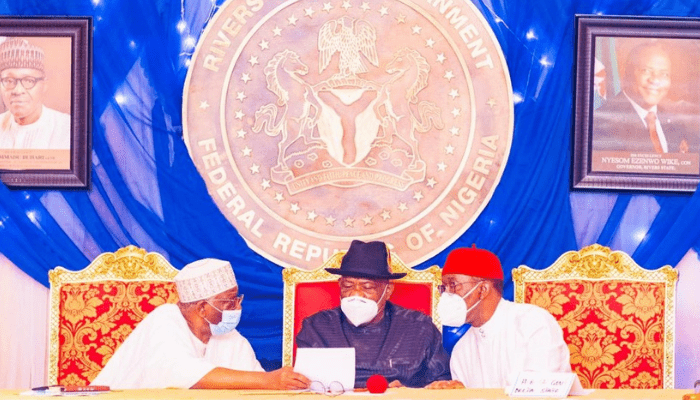 The recent engagement of South South leaders with the Federal Government which took place in Port Harcourt, Rivers State, will not solve the myriad of problems bedevilling the region, says security expert and advocate of youth development, Shola Mese.

Mese, who is the Chief Executive Officer of Focus Guard Security Limited, told BusinessDay in Warri that the recent engagement in Port Harcourt was a “jamboree”.

“We all know that that conference they held in Port Harcourt was all jamboree. That thing was rubbish,” Mese said.

“The South South senators, House of Representatives members, governors, traditional rulers and even the local government chairmen are the real problem of the South South.

“All the youth leaders in the South South have never held their governors, senators, House of Representatives members and council chairmen to ransom.

“Have they confronted these people? Have they ever confronted those at the helms of affairs in NDDC to tell them what they have been doing with all the money they get from the Federal Government? They have not,” he said.

Mese, who is also the owner of Shola Mese Foundation, a non-governmental organization responsible for taking young drug addicts off the street, lamented that despite the huge amount of money released to the Niger Delta Development Commission, the region has remained undeveloped.

“We have more than enough to do whatever we want to do in this Niger Delta region. But because of the selfish, wicked and satanic leaders that we have, it’s has been difficult to achieve it. Everybody wants to do things for their own pocket. So, there is nothing you will want to tell me about that South South conference. It’s all rubbish,” Mese said.

Mese said what the South South leaders did in Port Harcourt was a mockery of the South South, alleging that what they were fighting for was their pockets.

“They have have not told us about the amount they voted for that South South meeting. They cannot tell us that they went there and they were not given allowances. What do you need allowance for if you are really part of the struggle?

“These leaders are just making a mockery of all of us in the South South. It’s unfortunate that the EndSARS protest did not end the way we wanted it to end. The youths did not do what they were supposed to do.

“Check the demands of the EnsSARS, they are much more meaningful than those of the South South leaders as it were.

“The truth of the matter is that we are disappointed with all our so called leaders,” he said.

He urged the South South leaders to stop blaming the North for their woes, saying that the North were laughing at them for not being able to develop their region in spite of the huge amount they collect from the Federal Government every month.

“Let’s face reality. Our leaders are our problem and not the North. They are only taking advantage of the greed of our leaders,” Mese added.

He said the only solution to the problems of the region was for the youths to take their destinies into the hands and demand for good leadership.

“The only way to get out of this situation is for the youths to take the bull by the horn either peacefully or forcefully. By forcefully I don’t mean carrying of arms. There are other ways to take it forcefully.

“But we should start the cleansing from our homes, community, and state because the North is not our problem. They have their own challenges,” he added.