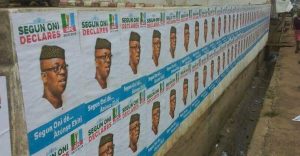 The governorship campaign posters of former Governor of Ekiti State, Segun Oni, has been spotted in strategic locations in Ado Ekiti, the state capital.

The posters which bear the logo of the Peoples Democratic Party also had inscriptions of ‘Segun Oni for Governor, for a greater tomorrow’.

Recall that the former Deputy National Chairman (South) of the All Progressives Congress returned to the PDP in 2019 due to his differences in the party.

A member of the media team of Oni’s political platform, ‘Atunse Ekiti’, Dr Bayo Arowolaju, said, “Well, as an insider in Atunse Ekiti group, I know that Segun Oni has not formally declared his intention for the plum seat, but there are agitations from groups and individuals.”

“These posters, to us, are just a call that the right person should be allowed to govern the state for the people to feel the dividends of democracy.” 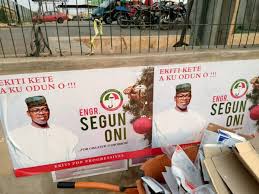