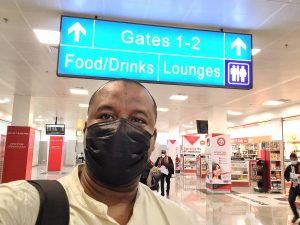 Naija News reports that Ganduje had fired Yakasai in February after he criticised the government of President Muhammadu Buhari over rising insecurity.

In some pictures he posted on social media, Yakasai was seen at the airport of a yet-to-be-known country.

A Qatar Airways aircraft was also seen at the background. He captioned the tweet “Goodbye Naija”.

It will be recalled that Yakasai was sacked last month by Governor Ganduje for criticizing the Buhari government and the ruling All Progressives Congress (APC), blaming them for the inability to curb the general insecurity confronting the country.

Before he was sacked, he was also picked up and grilled by the Department of State Services (DSS) for his public statements against the government.

Yakasai mockingly declared that President Buhari is confusing bandits and terrorists in the country with conflicting ultimatums and “stern warnings”.

Taking to his Twitter page, Yakasai wrote: “To be honest, you’re confusing these bandits/terrorists. Last week in Zamfara you gave them 2 months’ notice, today na stern warning, which one should they take seriously Mallam Garba? If I’m a father with a kid in boarding school in the affected States, I’ll withdraw them kawai.”