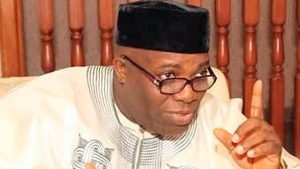 Okupe had in a post on Twitter on Saturday alleged that the North is yet to forgive the Igbos over the happenings of the 1966 coup during which many high-profile persons including the Sardauna of Sokoto, Sir Ahmadu Bello were killed.

According to him, the North still views the coup as an ‘Igbo Coup’ and would therefore not support the region to produce the next president of Nigeria.

Okupe added that except the Southern region gets the support of the North, it would be impossible for any Nigerian president to emerge from the East.

He wrote: “An Igbo President is only possible if we are able to evolve a grand National Consensus on the project such as that which was enacted in 1999, when the 2 presidential candidates were Yoruba.”

Some Nigerians were not happy with his comments, with some accusing him of trying to smear the Igbo presidency campaign due to his presidential ambition.

Reacting on Sunday, the President-General of the Ohanaeze Ndigbo Youth Council, Mazi Okwu Nnabuike, said “there is every indication that Doyin Okupe needs urgent medical attention. His action is not far from a person that is mentally deranged.

“He is being tormented by Aso Rock spirit and needs both orthodox treatment and spiritual deliverance.”

“We have it good authority that Okupe was found as a willing tool by some desperate politicians who are doing everything to stop an Igbo man fr becoming President of Nigeria.

“They saw in him an unsound mind and capitalized on it to insult the sensibilities of Ndigbo. We advise his family to help him before his condition deteriorates. He is having issues with his mental capacity.

“Only someone that is mentally deranged will come up at this point in history to claim that the said coup was an Igbo coup, even when the evidences are there that other parts of the country were indeed part of that exercise.

“We must make it clear that no matter the antics anyone may play up, Igbo presidency is non negotiable and we are not going to be cajoled into giving up on that. Anything to the contrary will mean that the Igbo have been asked to leave Nigeria.

“A million mad people like Doyin Okupe will not stop Ndigbo. He should go and face his case before the Economic and Financial Crimes Commission, EFCC. He is apparently playing this boyish game to earn a soft landing but all these antics had fallen like pack of cards.”