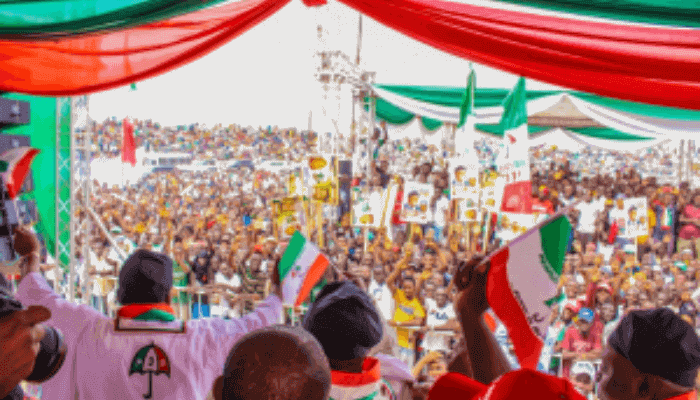 The women’s wing of the Peoples Democratic Party (PDP) has demanded the slot of Vice President as a condition for the party to gain their support in the 2023 Presidential election.

It also called on women to make themselves relevant and available to contest elective offices in order to take advantage of the 35% affirmative action already promised by the party.

The women canvassed this position on Monday in Abuja at the opening of a Two-Day Stakeholders Consultative Meeting, organised in partnership with the International Republican Institute (IRI).

The PDP National Woman Leader, Mariya Waziri, said the meeting was called to discuss among the PDP women to encourage and explore suggestions for strengthening the party, especially at the grassroots.

“During this meeting, we shall also review and fine-tune our engagement strategies and approaches, especially bearing in mind that we have some by-elections and governorship election in Anambra on the horizon,” she said.

Waziri expressed hope that the women could produce a working document that would be presented to the party during the constitutional review period.

“Amidst all distractions, disruptions, and insinuations, if we only achieve the mass inclusion of women into our political space, we would have achieved our central goal which is what is most important,” she added

The woman leader promised to support women who showed interest in occupying political offices, adding that I am willing to give as much support as possible, provided the woman is able to sustain all other variables.

“With deliberate and consistent efforts, and with God Almighty on our side, I have no doubt that we will achieve our goals in due course,” she said.

A member of the sixth National Assembly, Senator Grace Bent (Adamawa South), challenged the PDP to cede the VP’s slot to women if the party needed their support in 2023.

She said, “We are saying that in 2023 if our political party does not present a female as a vice presidential candidate, we are not going to support them. So set the ball rolling, all-female stakeholders, female woman leaders, tell the party, give us female vice president, otherwise, we will all sit home; we shall not vote.”

Recalling that a botched attempt was made to push for a woman deputy national chairman in the past, Bent urged the women to work together for the actualisation of the goal

“A lone voice is always a problem and this has always been the problem year-in, year-out. We attempted to push for a deputy national chairman in the person of Hajiya Ina Chiroma and I realised that for women to be successful in politics, you must learn how to fight, you must have an aggressive spirit because no one gives it to you on a platter of gold,” she said.

Corroborating, a former Leader of the House of Representatives, Mulikat Areola-Akande, lamented that the women were lagging behind and needed to come together.

“It is only if we unite that the men will see our strength. Women who have been in the National Assembly, we tried our best. When you are a lone voice, you can’t achieve anything, but when we have the number, they will respect us,” she said.

In her opening remarks, the Resident Programme Director of IRI, Angee Wambugu, acknowledged that by the 2019 elections, there was a decline in the representation for women.

She said, “So we feel that in order to bridge and avoid such pitfalls in subsequent elections, we have to work towards enhancing the participation of women within the political party processes.

“We are supporting the office of the Woman Leader on this occasion to identify areas where there could be recommendations especially now that the party is undergoing reforms to see how we can further enhance the participation of women leaders.”

She promised that recommendations from the meeting would be taken to the national leadership of the party for implementation.

“We cannot have women constituting half of the Nigerian electoral demography and yet, we are struggling with the figure of women who are elected during general elections. This is the time to change that narrative and it has to start with the PDP.”