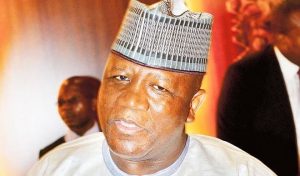 Governor Bello Matawalle of Zamfara State has been told to be careful about wanting to dump the Peoples Democratic Party’s camp if he cares about retaining his position.

Naija News understands that a former governor of the state, Alhaji Abdulaziz Yari, gave the warning while speaking at the secretariat of the All Progressives Congress (APC) in Gusau, the state capital on Sunday, April 11 during the distribution of N1.3bn grains he bought to share as Ramadan present to APC supporters.

The politician cautioned Matawalle to carefully decides his fate, noting that he would definitely lose his seat if he leaves PDP, going by the Supreme Court’s verdict that brought him to power in 2019.

Represented by Senator Kabiru Marafa, Yari said APC has not received any verbal or writing statement about Matawalle’s defection to their party, APC. He, however, cautioned that the apex court nullified the election of the APC candidates in 2019 and announced the PDP candidates as winners who would remain in power till 2023.

He said: “As such, until after that period, any PDP elected officer who defects to another party must also vacate his seat going by the court’s judgment,”

According to him, the Zamfara State seating governor was being misled by some people to join the Nigeria ruling party “forgetting the circumstances that have made him become the governor of the state.”

Meanwhile, the Peoples Democratic Party (PDP) on Sunday released the list of candidates cleared by its screening committee for the South-West Zonal Congress.

Naija News reports that the congress which is expected to produce the party’s executive in the region would hold on April 12, 2021.

A document, signed by the National Organisation Secretary of the party, Col. Austin Akobundu, and obtained by PUNCH, indicated that a former deputy governor of Oyo State, Taofeek Arapaja, and the immediate zonal chairman of the party, Dr Eddy Olafeso, would contest the chairmanship position.