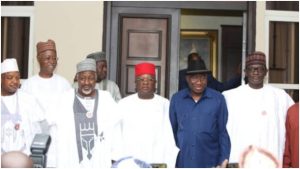 The Peoples Democratic Party (PDP) has revealed why governors elected on the platform of the All Progressives Congress (APC) visited ex-President Goodluck Jonathan.

The PDP stated that APC governors visited Jonathan in Abuja after realizing that Nigerians were better off under his administration in 2015 before they created artificial symbols of misgovernance, corruption and other misgivings just to grab power.

Naija News reports that the PDP made this known in a statement on Sunday by Kola Ologbondiyan, its National Publicity Secretary.

The main opposition party said the APC governors have accepted its success in building a strong nation with a virile economy that was rated as one of the fastest-growing economies of the world.

“The visit is therefore a subtle step by APC governors into the corridors of the PDP in agreement that our party holds the solution to the myriads of problems brought to our nation by their APC and President Muhammadu Buhari.

“The PDP, therefore, receives the visit by the APC governors as an apology by the APC to our party and Nigerians over the lies, beguilements and other irresponsible allegations deployed by the APC to grab power, only to lead our nation on a journey to nowhere,” the PDP said.

The party warned Nigerians to be watchful of the antics of the APC that have failed in governance and the management of its own affairs.