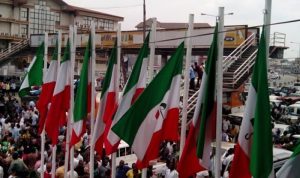 Suleiman stated that ten political parties participated in the election, which he said was free, fair, and credible.

“I certify that the election was conducted hitch-free and 10 political parties participated in the election.

“The candidates that won have the highest number of valid votes and satisfied the requirements of law.

”They are hereby declared winners and are hereby return elected according to law,” he said.

Recall that the All Progressives Congress (APC) had earlier announced its resolve to boycott the election for lack of transparency.

Meanwhile, the converner of the Concerned Nigerian group, Deji Adeyanju has claimed that Governor Yahaya Bello of Kogi State will not contest for the 2023 presidential election.

In a series of tweets, Adeyanju accused the Kogi governor of eyeing a ministerial position after the 2023 general election.

According to him, Yahaya Bello was only tricking people into believing he’s contesting for the presidency.

“Yahaya Bello is contesting for Ministerial position in 2023 and not the president. I only feel sorry for those that have fallen for his tricks,” he said.

“Nigerians will refuse to hold their elected or selected leaders accountable and even insult those who do but are quick to ask pastors and fellow citizens for accountability.”