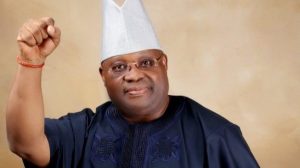 The former lawmaker representing Osun west senatorial district, Ademola Adeleke, has been endorsed by the Peoples Democratic Party as its Governorship candidate in the 2022 gubernatorial election in the state.

The decision of the party is part of the resolutions arrived at a reconciliatory meeting of the Osun PDP, mediated by the national reconciliation team, headed by its chairman and a former Senate President, Bukola Saraki.

The groups from the Osun State Chapter of the party which attended the meeting on Friday agreed that Sunday Bisi will be the recognised chairman of the party in the state.

The meeting was called pursuant to a national reconciliation committee set up by the PDP National Working Committee led by Prince Uche Secondus.

As part of the reconciliation process in the Osun PDP, Saraki assured that the party has noted the concerns raised by Olasoji Adagunodo and that necessary steps will be taken to clear his name over allegations leveled against him as a former state chairman.

While noting that such is not unusual in politics, he advised that Adagunodo be accorded his due respect as a former chairman of the party in the state and that he be carried along in party activities going forward.

In a related development, Saraki has appealed to Nigerians to give the Peoples Democratic Party (PDP) another chance during the 2023 presidential election.

He argued that only the PDP can turn around the fortunes of the country which he claimed has already become battered under the leadership of the All Progressives Congress (APC) who took over in 2015.