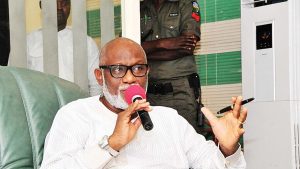 Governor Rotimi Akeredolu of Ondo has condemned the plot by a group of people agitating for a Yoruba nation, called Oduduwa.

Recall that a group under the auspices of the Ilana Omo Oodua led by Prof Banji Akintoye berated Akeredolu for rejecting the agitation for the creation of a Yoruba Nation.

Akintoye and Sunday Igboho Adeyemo had called for the establishment of a Yoruba nation while slamming Nigeria’s current leadership.

But in a statement issued by the Special Assistant to Akeredolu on Special Duties and Strategy, Doyin Odebowale, on Thursday, Akeredolu said those calling for such are not representatives of the Yorubas.

Akeredolu said the people of the South-West would not be deceived by the plan of the secessionists, adding that Akintoye was not a leader of Yorubaland and could not speak for the people.

The statement partly read in part, “Let it be reiterated again. There will be no agitation for secession in any part of Ondo State. Prof Akintoye should submit himself to the people if he is so desirous of representing them.

“it is presumptuous, denigrating and condescendingly spiteful for a group of hustlers, living largely in anonymity but struggling for relevance, to keep proclaiming and legislating on issues which affect the destiny of a whole people, without the faintest suggestion of paying even scant regard to their feelings or extending due courtesy to the real representatives of the people whose opinions they discount as unimportant.

” The people are discerning. They know the impostors. They have not forgotten the activities of the suborned agitators, the presumed penitent activists. The Ondo people, and indeed Yoruba are the easiest to lead but the most difficult to deceive. With them sophistry and demagoguery have their limits.”