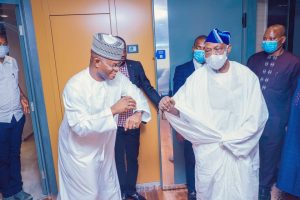 A son of former president Olusegun Obasanjo, Olujonwo, has called on Governor Yahaya Bello of Kogi State to contest for the 2023 presidency.

Naija News reports that Obasanjo’s son made the call during a courtesy visit to Yahaya Bello in Abuja, FCT.

This online newspaper recalls that Jonwo’s father, Obasanjo, had also paid a visit to the Kogi State governor.

Speaking during the visit, Olujonwo described Bello as a beacon of hope, urging the Kogi governor to step up his aspirations in order to create leadership space for the youths.

He said Nigerian youths have been neglected for too long despite the numerical strength and huge contributions in electioneering processes, have been denied the space to manifest their aspirations in political decisions making.

According to Jonwo, at 35-45 of age, current elder statesmen like General Muhammadu Buhari, Gen T. Y. Danjuma, Yakubu Gowon and of course his father, Olusegun Obasanjo were at their best in nation-building and leadership.

“With a Bello presidency, there is no doubt that youths of competence and patriotic valour under the age of 27-30 can be ministers,” he said.

He commended the governor for his watertight fight against insecurity, infrastructural development drive and his wise decision and proactive leadership thrust in resolving the food blockade crises.

Obasanjo also tasked Bello to remain resolute and unshaken in his audacious push of occupying the seat of power come 2023.

“You must remain resolute, stoic and not give in to intimidation, name-calling or sort. Your audacity is a big reawakening to Nigerian youths and this has given us more hope and confidence today”.