North vs South: Nasarawa Governor Reveals Zone That Should Get 2023 Presidency 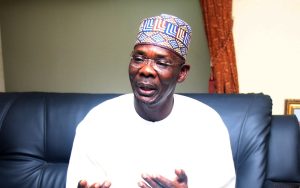 Governor Abdullahi Sule of Nasarawa State has stated that Nigeria’s next president come 2023 should come from the southern part of the country.

He stated this on Wednesday at the Government House in Lafia, the state capital, when he received supporters of Senator Umaru Tanko Al-Makura calling for the ex-governor to become All Progressives Congress (APC) National Chairman.

Governor Sule stated that having benefitted from power rotation, it would be unfair of him to denounce same.

“That is why, from all indications, I have never said anything against the agitation for rotation of the presidency to the South. It’s because I don’t think it’s a bad idea for peace in Nigeria, if there is rotational presidency,” Sule said.

He also stated that for fairness and peace, if the presidency is zoned to the South, the APC national chairmanship should be zoned to the North.

“The Northwest currently has a President that has at least two years to go. So, it will not be ideal to have a president and a chairman, even for one year, much less for two years, from the same zone.

“The Northeast has the Senate President, currently. It will not be ideal again to have the chairman from that zone. The only zone that is ideal to occupy that position is the Northcentral,” he said.

Naija News reports that some other governors in the North, including Babagana Umara Zulum (Borno), Nasir El-Rufai (Kaduna), Abdullahi Umar Ganduje (Kano) and Aminu Bello Masari (Katsina), have publicly backed a president from the south.