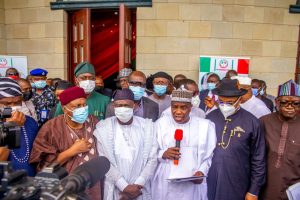 The Governors of the main opposition party accused the President of being biased against states controlled by the opposition.

The PDP Governors disclosed this in a statement released on Friday after their meeting in Makurdi, the Benue State capital.

The governors condemned the “intimidation” through “security agencies, unequal access to federal resources, promotion of divisions in the opposition parties with fake promises, and falsehoods”.

“To this end, we call on Mr President to lift the so-called “No flight Zone” and other intimidating tactics imposed on Zamfara State.”

The Governors added that the directive of the President in Zamfara State was not extended to states with similar security challenges like Kaduna, Borno, Katsina, Yobe, among others.

The governors described the action against Zamfara as “politically motivated to ensure that the Governors move over to APC.”

They mocked the ruling party over its inability to constitute a democratically-elected National Executive Committee as required by the constitution.

The communiqué said a party that operates by military fiat with an appointed and unelected executive committee at all levels, ward to national has no business running the affairs of Nigeria.

PDP Governors further stated that APC is interested in playing politics and jockeying for power in 2023, “when they have done an abysmal and terribly poor job of their current questionable mandate”.