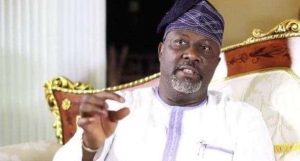 Former Kogi lawmaker, Senator Dino Melaye has reacted to the meeting between the Governor Yahaya Bello of Kogi State and the former Minister of Aviation, Femi Fani-Kayode.

Naija News reports that the former minister paid a courtesy visit to the governor at the Government House, Lokoja, on Sunday, February 7, 2021.

In a tweet via his Twitter handle on Monday, Fani-Kayode said he visited the governor to discuss some issues concerning the latest happenings in the country.

Fani-Kayode said the visit which was a friendly one, provided a frank, candid, fruitful, and productive discussion about Nigeria.

The PDP chieftain called on all Nigerian politicians to come together without bitterness, and discuss ways to solve the challenges facing the country.

Fani-Kayode also urged Nigerians home and abroad to unite as one to save the country.

Reacting to the meeting on Monday, Melaye condemned the governor for the visit, saying that he is only trying to further deceive and distract the people of Kogi.

The controversial politician said governor Bello is trying to use his presidential ambition to hide the failure of his government.

“Gov. Bello is deceiving and distracting all those who take him seriously on the phantom presidential ambition to shield attention from the colossal and unprecedented stealing and failure of his wasted years in Kogi State. At the right time, we will burst his bubble,” he wrote via his Twitter handle.