Makinde Threatens To Reveal Those Behind Worsening Insecurity In Oyo 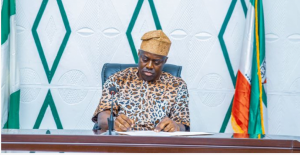 Governor Seyi Makinde of Oyo State has said he would soon expose those politicizing the issue of security in the state.

He stated this while addressing the congregation at the St Peters Anglican Cathedral, Aremo, Ibadan, on the occasion of Easter Sunday Service.

A statement by the Chief Press Secretary to the governor, Taiwo Adisa, quoted the governor as saying that insecurity is not peculiar to the South-west state.

He warned that there would not be a state or nation to govern if some individuals keep politicising insecurity.

Makinde stated that those politicising insecurity because of their 2023 ambition to jettison the idea and seek the face of God instead of engaging in actions he said, could trigger palpable fear in the state.

He said: “I want to say Happy Easter to the Church of God and pray that we shall witness more on earth. It is another Easter season and it is another opportunity for us to say thank you to our Lord and Saviour, who died for us to be saved.

“The Archbishop has already preached and the only thing I can do is to thank God and say one or two things, which our government is doing.

“Very soon, we will be two years in office and the area of focus of our government remains education, health, economic expansion and security.

“When the Archbishop was preaching, he mentioned that there are security challenges. Yes, it is true and I can confirm to this gathering that if there is something that makes me not sleep with my two eyes closed, it is the issue of security.“As a government, we are doing different things and, as a matter of fact, it is on record that there is no government in this Oyo State, which has spent more money on security than this current one.

“When we came in, within the first hundred days, we gave 100 patrol vehicles out to security agencies.

“All the communication gadgets they needed were provided to cover all the areas in Oyo State and they were able to communicate with one another without hindrance. Also, before we came in, there was nothing like Amotekun, but we were able to set it up when we came in. It was just last week that Ogun State set up its Amotekun outfit.

“If you look at those who have set up before now; states like Osun, Ekiti and Ondo, they recruited 300 personnel each, totalling 900 for the three states. But in Oyo State, we recruited 1,500 Amotekun personnel.

“The issue of insecurity is not peculiar to our state; however, rest assured that this government will not rest until every inch of Oyo State is secure.

“But I must warn that politics is inherent in this insecurity issue in Oyo State and in the days to come, I will expose the people that are politicising the issue of security.

“I, as well as those working with me are taking our time. If we hear of any report on insecurity, we will investigate. I know I don’t have much time but I need to explain to the people what is happening so that when they hear about those trying to politicise the issue of security, they will easily know and identify what exactly is the truth.

“I symphatise with the people! Why? If they continue to politicise the issue of insecurity because they want to be in government in 2023, they should know that if there is no Oyo State or Nigeria, I don’t know how they want to govern the state in 2023.

“So, I also want to beg you that it is not all we read on social media that is true. If we have friends who are aspiring to get into political offices, they should keep looking unto the face of God instead of seeking to destroy our state and country.

“God has forgiven us our sins. Let us also forgive others who have sinned against us. I have forgiven my offenders too.”