Jonathan Declares Position On 2023 Presidency After Visit By APC Governors 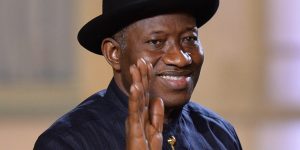 The camp of Dr. Goodluck Jonathan has debunked rumours of plans by the former President to contest the 2023 presidential election in Nigeria.

The clarification was done amidst speculations that the former president is considering a return to power in 2023. The insinuation was further heightened after some governors of the ruling All Progressives Congress (APC) paid him a courtesy visit.

The visit has also become an issue of debate between the APC and the Peoples Democratic Party (PDP) with both parties trading words over the implication of the visit.

However, his media aide, Mr Ikechukwu Eze, has clarified that his principal is not thinking of running for presidency in 2023 and all such talks are only rumours.

Eze added that the recent visit by APC governors has no political meaning as they only visited Jonathan as a statesman to celebrate with him on his birthday.

“PDP governors also visited him; it was not only APC governors. Governor Bala Muhammad was there, they visited him as a father and statesman to celebrate with him, it was not a political party affair.

“Anything you are hearing about 2023 is rumour and we don’t have time to be responding to rumours, the former President is a very busy person to be listening to rumours,” he said when contacted by Daily Trust on Jonathan’s 2023 presidential ambition.

Meanwhile, labour leaders on Sunday evening, walked out on a meeting with the federal government delegation which was scheduled to discuss the recent fuel price hike by the government.

It is understood that the representatives from both sides couldn’t agree on the items listed for deliberation during the meeting.

The Nigerian Labour Congress (NLC) was represented at the meeting by its deputy president, Najeem Yasin. Also on the labour’s side were the President of Nigeria Union of Electricity Employees (NUEE), Joe Ajaero, and the President of Trade Union Congress (TUC), Quadri Olaleye.