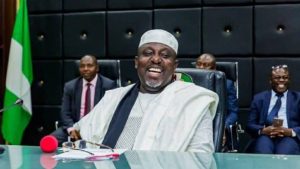 Senator Rochas Okorocha (APC-Imo West) has congratulated Senator Ifeanyi Araraume on his affirmation as the authentic candidate of the All Progressives Congress (APC) for the Imo North Senatorial bye-election.

The Federal High Court, Abuja had on Thursday ordered the Independent National Electoral Commission (INEC) to issue Senator Ifeanyi Ararume a certificate of return within 72 hours.

Justice Taiwo Taiwo, in a judgment, said Ararume remained the winner of the election going by the earlier judgments of the court.

According to him, with regard to the Appeal Court judgment in Abuja, the 3rd defendant, Chukwuma Ibezim remained disqualified.

Therefore, Justice Taiwo declared Ararume as the APC valid candidate in the poll.

Reacting in a statement issued by his media adviser, Sam Onwuemeodo, Okorocha said with Senator Araraume in the Senate, lmo state would have two senators of APC extraction in the Red Chambers of the National Assembly, out of the three from the state.

The former Imo governor added that having Araraume in the Sebate would be a very wonderful development.

He said: “Senator Araraume having served in the Senate for two terms before now, would now be expected to bring his wealth of experience to bear and for the good of the people of Imo North Senatorial District in particular, Imo people and Nigerians in general.”

He described the ruling as “a shame on our democracy.”