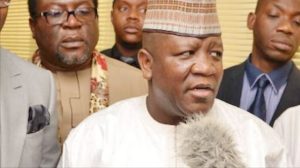 Former Governor of Zamfara State, Alhaji Abdulaziz Yari has revealed how the All Progressives Congress (APC)  will reclaim the state in the 2023 governorship election.

Speaking to reporters on Saturday after revalidating his membership in his polling unit, Talata-Mafara town, Yari said the APC will reclaim the state because it has always been an APC state right from 1999.

Yari stressed that the APC will win the forthcoming governorship election in the state by campaigning vigorously and ensuring that the party is united and free from all conflict.

He noted that what happened in 2019 was a result of a political misunderstanding between APC members which has been resolved.

He said: “There is no doubt that we will reclaim our stolen mandate from the ruling PDP in the state because Zamfara has always been an APC state right from 1999 that Nigeria recovered democracy from the military cabals.

“The PDP formed the first government in the state since 1999 with the help of the Supreme Court to get the total control of the state and I am assuring you that we are going to reclaim the state in the next election God willing.”

The former governor, who is facing trial, commended the national leadership of the party for the ongoing registration and revalidation exercise.