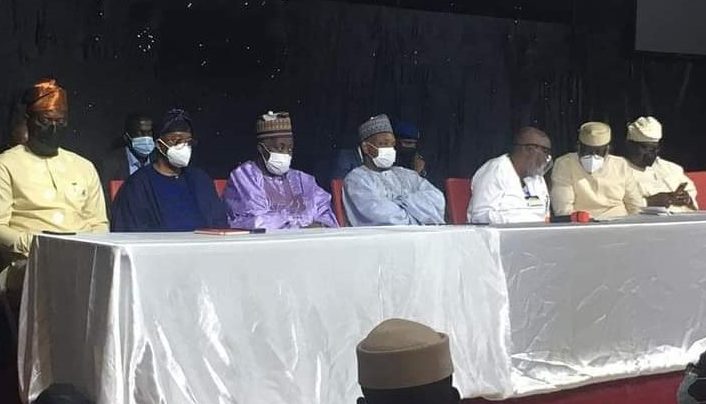 The Nigeria Governors Forum (NGF) has overruled the eviction order earlier given to Fulani herdsmen to quit the Ondo State forest reserves within seven days.

Recall that Governor Oluwarotimi Akeredolu had last week ordered herdsmen to vacate all forest reserves in the state within seven days over increasing criminal activities linked to the herders, who also allegedly use the forest reserves as criminal hideout.

But, rising from an emergency security meeting in Akure, the Ondo State capital on Monday, the Nigeria Governors Forum (NGF) nullified the eviction order to the herdsmen in Ondo or any other states in the Southwest region, saying, “We must create economic opportunities for our people and reduce opportunities for criminalities in our country”, instead of issuing eviction order to Fulani herdsmen.

The meeting which had in attendance, Governors Kayode Fayemi of Ekiti (Chairman from APC); Gboyega Oyetola of Osun (APC); Oluwarotimi Akeredolu of Ondo (APC); Seyi Makinde of Oyo (PDP); Abubakar Bagudu of Kebbi (APC) and Badaru Abubakar of Jigawa (APC), the leadership of Miyetti Allah Cattle Breeders Association of Nigeria (MACBAN), as well as security agencies and other stakeholders, discussed the way and manner of co-habitation between residents of Ondo and Southwest as well as Fulani herdsmen and other tribes residing in the region.

According to Governor KayodeFayemi of Ekiti State and chairman of Nigeria Governors Forum, the purpose of the meeting is to find lasting solutions to the incessant killings, kidnapping and crises between herdsmen and farmers in the Southwest geo-political zone, asking Miyetti Allah leadership to address issues of crimes and criminality always attributed to Fulani herdsmen and create strong framework of engagements with mainstream security agencies as well as alternative security network like Amotekun Corps.

Governor Fayemi said at the meeting, that his counterpart, Governor Akeredolu of Ondo State, only directed that all herdsmen should register for them to operate in the state forest reserves. “This is your home. You’ve lived here, married and done business with us. Nobody is going anywhere. The statement by the Ondo State government had no eviction reference”, Fayemi told Miyetti Allah leaders.

In a communique issued at the end of meeting, Governor Fayemi said: “The security and welfare of the people of Nigeria is the primary purpose of government as enshrined in the 1999 constitution of Nigeria as amended. The stakeholders are committed to the unity and indivisibility of Nigeria. Insecurity is a national challenge and not peculiar to any tribe or region but must be addressed by the cooperation of all.

“The order of the Ondo State governor was misconstrued and misrepresented by a section of the media. He only ordered those occupying the forest reserves in Ondo State illegally to quit. Criminals should be apprehended and punished, no matter their origin, class or status. Security agencies have been trying to stem the tide of criminality in the country but must step up their efforts in the fight.

“There is the need to build partnership for peace and security with MACBAN and jointly wage war against criminality. No one had sent anyone away from any state or region but all hands must be on deck to fight criminality. MACBAN is a peace loving, law abiding organisation which does not harbour or condone criminals and agreed that; Night grazing should be banned henceforth.

“Under age herding is inimical to security and hence be banned. Occupation of state forest reserves illegally is condemned. MACBAN also suffers insecurity and kidnapping and thus desire peaceful coexistence. MACBAN is ready for any peaceful move by the states to engender security. Fake news is another issue that makes our security worse than solving it. There must be an enduring framework with MACBAN in a way that will help address security issues.

“That free range grazing must be stopped to avoid conflicts between the farmers and the herders. Strengthening an alternative security arrangements and make them complementary to the mainstream security agencies in Nigeria. MACBAN should embrace and be committed to modern breeding process by creating grazing reserves and practice ranching to prevent cattle roaming about.

“Standing Committee comprising of farmers, MACBAN and the Government should be set up in each state (where they don’t exist) to ensure synergy and result.”

Meanwhile, the chased-out Fulani herdsmen, including their heads known as Serikis that ran away from Oke-Ogun and Ibarapa axis of Oyo State as a result of attacks and eviction spearheaded by Sunday Adeyemo, otherwise known as Sunday Igboho, are reportedly regrouping in Opeji, Apojola, Mawuko and Alabata areas of Odeda local government area of Ogun State as the residents of the areas are in palpable fear of nocturnal attacks by these regrouped herdsmen on the outskirts of Abeokuta, the state capital.