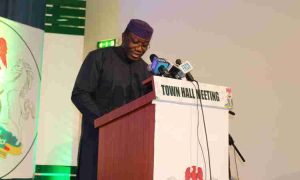 Governor Kayode Fayemi of Ekiti State has faulted the views of three leaders of the ruling All Progressives Congress (APC) on the on-going membership registration and revalidation exercise of the party.

Speaking to reporters at his country home, Isan Ekiti, on Tuesday, after revalidating his membership at Ogilolo Ward 11 unit 09, Ekiti State, Fayemi disagreed that the exercise is unconstitutional or illegal.

The governor who is also the Chairman of the Nigeria Governors Forum (NGF) added that the reason for the exercise is for the party to know all its members and not deregister them.

“The APC Constitution in Article 9 stipulates that our register must be updated every six months. So, Baba Akande never said we should not register or revalidate our membership. He only tasked the leadership on the way it should be done to earn credibility.

“We don’t want to deregister anybody, let members revalidate their membership, and those who are non-members but interested should also feel free to join us, that is what the exercise is all about,” he said.

Naija News reports that the National Caretaker and Extraordinary Convention Planning Committee under the leadership of Governor Mai Mala Buni of Yobe State has begun the nationwide exercise to update the registers.

But Bola Tinubu alongside his friend Akande had faulted the registration exercise, describing it as an aberration.

Akande had last week questioned the decision of the party leadership to call for a re-validation of the party’s membership register less than ten years after the party was initially formed in 2014.

He noted that if not properly managed, handpicking the leadership of any political party might spell danger for such a party.

The APC chieftain added that calling for an update of the membership register less than ten years after the formation of the party is an aberration that should not be taken lightly by the leaders.

Also speaking on Saturday, Tinubu said he would endorse Akande’s position on the ongoing membership registration and revalidation exercise.

The APC national leader also described the exercise as a waste, urging the party leadership to embark on true reconciliation.