Edo: Why I Am Probing Oshiomhole’s Govt – Obaseki 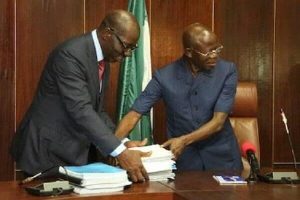 Governor Godwin Obaseki of Edo State has revealed why he is probing the administration of the former Edo State Governor, Adams Oshiomhole.

He revealed this while speaking at the victory party for Chief Dan Orbih, the PDP Vice-Chairman South-South, at the home of a former PDP BoT Chairman, Chief Anthony Anenih, in Benin.

Obaseki promised to continue the probe of the administration of Oshiomhole to expose the fraud that took place in it and recover all stolen funds.

He said, “They have dragged us to every court in the land, but with your prayers and support, God has continued to give us victory.

“When we were re-elected last September, I told you to give us time to look at governance, because I have been in government and I know many things that are not right. God has given us the opportunity to come again and with what we are doing now, the people and our party will not regret it.

“We are cleaning the house so that when you come in, there will be no issues and we will not be deceived any more.

“I was part of that administration, because I believe Edo must be developed. So, I sacrifice my time for eight years to help organise the state. I went to the World Bank to raise money for the state to enhance its development.

“But with what I have seen in the books, I look like a fool; while I was arranging finances and other things, I didn’t’ know that the money I was raising for the state was being frittered away.

“I don’t like probing; I like to go forward, but it has become very difficult, because when I look at the cost of contracts I awarded in 2020 with the ones awarded 10 years earlier, people have questions to answer.

“We are not a government that like to prosecute people or victimise anybody, but the truth must be told; Edo people must know how we awarded $200m contract 10 years ago and we have paid every amount of that contract and it has not been completed.”

He added, “Edo people must be told how a project that is supposed to remove flood from Benin City created more flood. I am not an engineer, but we will call them to tell us what happened. They must explain to Edo people how we have been able to award contracts about a 10th of the cost and achieve more than they did 10 years ago.”

“This type of behaviour must stop and you can’t do something wrong and be shouting that someone is wrong because you don’t want people to know what you did wrong.”