Edo: Obaseki Has Declared Himself Incapable Of Ruling – APC 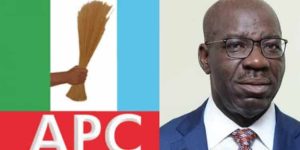 The All Progressives Congress (APC) in Edo State has accused the state governor, Godwin Obaseki of abandoning governance in the state.

The APC in a statement by its Assistant State Publicity Secretary, Ofure Osehobo accused Obaseki of abandoning his duties in Edo and ‘fleeing’ to Delta State to commission projects because he has nothing to show for his 100 days in office.

Osehobo in the statement, quoted the Chairman of the APC Caretaker Committee in Edo State, Col. David Imuse (retd.), to have said that Obaseki has lost focus for inaugurating white elephant projects on behalf of another state governor.

The statement added that Obaseki by his action has declared himself and the Peoples Democratic Party (PDP) ineffective and incapable of improving the lives of Edo people.

The statement quoted Imuse as saying, “It should interest the PDP and Mr Obaseki that by pretending to forget that the governor has clocked 100 days in office as a sole administrator and gone ahead on a wild goose chase to a neighbouring state, he has declared the PDP government in Edo State, which he heads to be ineffective and incapable of improving the lives of Edo people, going forward.”

Meanwhile, Nollywood actor turned politician, Yul Edochie has boasted that he would be the best President Nigeria has ever had come 2023.

Edochie who has not hidden his ambition to contest the nation’s number one political seat in 2023, made the declaration in a Twitter post on Tuesday.

He wrote: “I will be the best President Nigeria has ever had. YUL EDOCHIE 2023.”

He also included a hashtag #givetheyouthsachance.