Edo: I Have No Quarrel With Oshiomhole – Shaibu 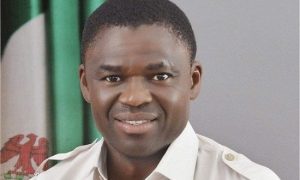 The Deputy Governor of Edo State, Philip Shaibu, on Sunday, disclosed that the former National Chairman of the All Progressives Congress, Adams Oshiomhole, taught him politics.

Shaibu made this claim during a thanksgiving service held at Saint Philip Catholic Church in Jettu, Etsako West Local Government Area of the state, on Sunday.

The event was held to celebrate the victory of Shaibu and the state Governor, Godwin Obaseki, under the platform of the Peoples Democratic Party.

He said, “Adams Oshiomhole taught me all I know now politically. He made me stand my ground and help us end godfatherism. I have no quarrel with Adams Oshiomhole.”

The Deputy Governor further stated that there numerous lessons to be learnt from the re-election of Obaseki.

The deputy governor said, “We must come together as a nation in recognising our shared interest in placing boundaries on our competition in order not to divide the nation into hostile and irreconcilable camps. This dangerous impasse is one area where the wisdom of Governor Godwin Obaseki has reigned supreme.”

Shaibu described his principal as a selfless governor, who has his people at heart. He charged the people of the state to support the administration to deliver on its campaign promises.

In a related development, Governor Obaseki had revealed that he visited the General Overseer of the Redeemed Christian Church of God (RCCG), Pastor E. A Adeboye on different occasions in the build-up to his second term re-election.

He revealed that each time he visited the cleric for prayers, he was assured that all will be well and he would emerge victoriously.