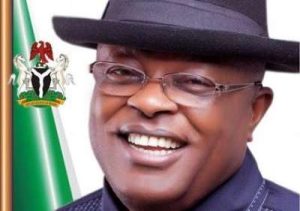 The Peoples Democratic Party (PDP) has debunked reports that some leaders in Ebonyi state including Senator Sam Egwu and 23 others were suspended.

The main opposition party denied the reports in a statement on Sunday by its National Publicity Secretary, Kola Ologbondiyan.

The PDP accused recently defected Governor David Umahi of causing confusion in the party after failing to pull leaders with him to the All Progressives Congress (APC).

While warning the governor to steer clear of the PDP, Ologbondiyan clarified that the PDP does not have a state Working Committee in Ebonyi.

National Publicity Secretary, Kola Ologbondiyan, in a statement on Sunday, warned him to steer clear.

He said the rumored decision to suspend party members could only have been taken by a non-existent body.

“It is indeed pitiable that such individual will descend to the level of resorting to fabrications and calendar-doctoring in desperation for political redemption”, he wrote.

The PDP noted that the document being circulated on the suspension did not emanate from the state chapter.

“We have been made aware that the fabricated document emanated from a former leader of our party in Ebonyi who left on a personal voyage to another party”, Ologbondiyan said.

Recall that Sam Egwu, a former Ebonyi governor, had stated that members of the National Assembly would not join Umahi in dumping the PDP for the APC.

Umahi had joined the ruling APC last week citing PDP’s injustice to the South-east as his reason.