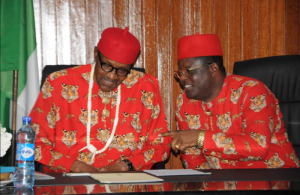 Governor David Umahi of Ebonyi State who recently defected to the All Progressives Congress (APC) has stated that he loves President Muhammadu Buhari.

Speaking in his hometown at Uburu community, Ohaozara LGA on Monday, he said he dumped the Peoples Democratic Party (PDP) because of the love he shares with Buhari.

Umahi, the chairman of the South-east governors forum, said that the President’s love for Ebonyi would have been enough reason for him to defect.

He said: “You can say anything you want to say but the president loves me and I love him also.

“I do not know how this love happened, but you should realise that grace is always upon the house of David.”

Umahi also tendered an apology to the former Senate President, Anyim Pius Anyim and the former Governor of the state, Sam Egwu following their recent exchange of words.

The Ebonyi governor also directed his supporters not to insult any the opposition again even if he is insulted.

He said: “I have decided to move forward. I have decided to forgive all and at the cost of this, those who may have been hurt because I take responsibility for the actions of all my government officials. And for all my supporters.”

“I offer apologies to them. I am not going to sit on the judgment with anybody. These apologies and forgiveness should be enough to settle all bad bloods. And I have no regrets for that. God directed me to do this. And I thank all our leaders who have intervened.”