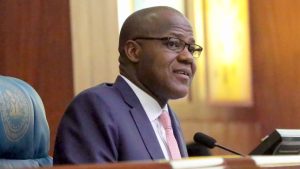 The party demanded that Dogara should be ripped-off of all benefits as a member representing Bogoro/Dass/Tafawa Balewa Federal in line with section 68 of the 1999 Constitution. Naija News recalls that Dogara had in July 2020 decamped from PDP to his former party, the All Progressive Congress, APC.

Dogara while giving reasons for his return to APC in July claimed that poor governance by the Governor of Bauchi State is the reason why he dumped the party.

However, PDP in a statement by its chairman in Bauchi State, Mr Hamza Akuyam, noted that there was no crisis of any kind within the party then, hence the court should declare Dogara’s seat vacant.

Defendants in the suit include: Dogara, the Speaker of House, the Attorney General of the Federation (AGF), the Independent National Electoral Commission (INEC) and the APC, Naija News reports.

Meanwhile, the Deputy Governor of Edo State, Philip Shaibu, on Sunday, disclosed that the former National Chairman of the All Progressives Congress, Adams Oshiomhole, taught him politics.

Naija News reports that Shaibu made this claim during a thanksgiving service held at Saint Philip Catholic Church in Jettu, Etsako West Local Government Area of the state, on Sunday.