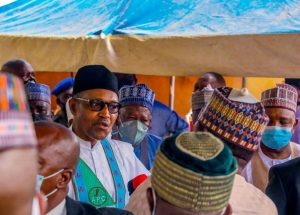 The opposition Peoples Democratic Party (PDP) has alleged that President Muhammadu Buhari and the All Progressives Congress (APC) are not interested in the well being of Nigerians.

The PDP spoke against the background that President Buhari was seen in public disregarding COVID-19 protocols on social distancing and the use of facemasks during his visit to Daura in Katsina State on Saturday.

It will be recalled that Buhari was in Daura to re-validate his APC membership status.

However, citing pictures from the event, the PDP on Sunday accused the President of violating his own executive order on COVID-19 which stipulates a 6-month jail term for defaulters.

The PDP in a series of tweets from its Twitter account said the President and his party’s violation of the protocols is a pointer to the fact that the current administration can’t be followed or trusted to lead the country right.

The statement reads: “The Peoples Democratic Party (PDP) has expressed dismay over President Muhammadu Buhari’s reported violation of his own executive regulation on #COVID19 which provides for 6-months jail term for defaulters.”

“The PDP asserts that it is a huge national embarrassment and gross failure of leadership that President Buhari, who ought to lead by example, is being reported of publicly violating the COVID-19 regulation, which he signed just five days ago.”

“It is indeed scandalous that while Nigerians are striving to obey the COVID-19 regulation, which stipulates the compulsory wearing of nose mask and physical distancing in the public, they are being confronted with reports of open violation of the law by Mr. President at the APC’s membership revalidation exercise in his hometown, Daura, Katsina state on Saturday.”

“The media is awash with reports and pictures of Mr. President in public, discussing with his party leaders at the event without putting on a nose mask or maintaining social distancing as stipulated by the new law.”

“Such disregard to law and rules, which have characterized the Buhari Presidency and the APC, is largely responsible for the failure of leadership under the Buhari-led APC administration in the last five years.”

“Moreover, this development has further shown that the Buhari Presidency and the APC are more interested in partisan politics than the health and wellbeing of our nation.”

“We ask, with this violation, does the @MBuhari administration and its officials still have the rectitude to enforce sanctions on any other defaulter in the absence of necessary regrets by President Buhari and his party, the
APC?”

The PDP added that President Buhari and the APC must tender an unreserved apology to Nigerians for violating the COVID-19 protocols in Katsina State.

“In this regard, the onus lies on President Buhari and the APC to clean up the mess by tendering an unreserved apology to Nigerians and take steps to observe necessary regrets over this violation.”

“Furthermore, the PDP, as a law-abiding party, urges Nigerians not to emulate such examples, but continue to exert themselves in observing all #COVID19 protocols placed to check the spread of the pandemic in our country.”

Meanwhile, President Muhammadu Buhari on Saturday after he revalidated his membership of the All Progressives Congress, at his hometown, Daura, Kastina State, said there won’t be an imposition from Abuja again in the party.

Buhari who had the company of the Chairman of the APC Caretaker Committee, Mai Buni; members of the committee; the Senate President, Ahmad Lawan; state governors and other party members, noted that he is committed to ensuring that the party is returned to the people at the grassroots.