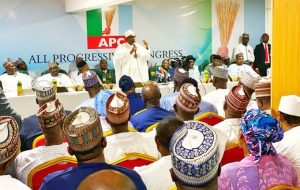 The All Progressives Congress (APC) has backed President Muhammadu Buhari to go after looters of public funds within and outside his government.

The ruling party made this known in a statement in Abuja on Wednesday, released by its National Secretary of the Caretaker and Extra-ordinary Convention Planning Committee, Sen. John Akpanudoedehe.

According to the statement, the Muhammadu Buhari-led Federal Government would not spare or condone looters found guilty.

It also condemned the Peoples Democratic Party (PDP) over the allegations that the Buhari’s regime was the most corrupt government in Nigeria.

The statement reads: “In the past weeks, the PDP has laboured to canvass tales of a phantom stolen N15 trillion public funds in the media.

“It is not surprising that the generality of discerning Nigerians have ignored the unfounded and baseless allegation, because it is clear that only the PDP believes its deviant tales.

“From petroleum subsidy rackets, unexecuted electricity, roads to arms contracts to fight against insurgency in North East, the PDP had been known with misappropriation and diversion of public funds.

“This has became the mainstay and pastime of successive PDP administrations.”

The statement added that Nigeria had since left that era under Buhari, adding that the PDP should back its allegations with facts.

It added: “The most ardent critics of the President Buhari and the government he leads will definitely chorus one fact: this government is unsparing and do not condone thieves within and outside government.

“Nigeria is definitely not where it was in terms of the pervasive corruption, impunity which ultimately ended the PDP administrations of 16 years of locust.

“With the implementation of Treasury Single Account, Biometric Verification Number (BVN) Whistle Blowing policy and other initiatives by the Buhari administration, the fight against corruption remained one of its strongest successes.

“The APC however, does not expect the PDP to see the positive impacts of the initiatives which included increased government savings among others.

“The bribe for jobs and other employment rackets perpetuated under PDP’s watch remained one of the most disgraceful and lowest points in the country’s history.

“Nigeria is no island, we suffered our fair share of the economic impact of the COVID-19 global pandemic on livelihoods and jobs.

“Commendably, Buhari showed leadership in cushioning the effects and guiding the country out of the economic challenges.

“No government in the country’s history has systematically put in place measures to create jobs and alleviate poverty like the President Buhari government.”