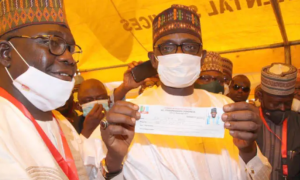 The Chairman of the All Progressives Congress (APC) National Caretaker Committee and Yobe State Governor, Mai Mala Buni, has replied to some leaders who condemned the on-going membership registration and revalidation exercise of the party.

Akande had last week questioned the decision of the party leadership to call for a re-validation of the party’s membership register less than ten years after the party was initially formed in 2014.

He noted that if not properly managed, handpicking the leadership of any political party might spell danger for such a party.

The APC chieftain added that calling for an update of the membership register less than ten years after the formation of the party is an aberration that should not be taken lightly by the leaders.

Also speaking on Saturday, Tinubu said he would endorse Akande’s position on the ongoing membership registration and revalidation exercise.

The APC national leader also described the exercise as a waste, urging the party leadership to embark on true reconciliation.

Oshiomhole said the revalidation exercise conducted by the party is illegal, urging the party to stop the exercise immediately.

But reacting to the criticism of the exercise after revalidating his membership in Bunigari, Gujba LGA, Yobe State, on Thursday, Buni said no party member would be left out in the on-going exercise.

“Article (9) 4 of our party is very clear about what we are doing; we cannot do anything outside the constitution. I am assuring all our party members that no one would be left unregistered.

“The exercise is going according to plan, as expected and would avail the party the chance to wax stronger by having more membership in the country,” he said.