APC Leaders May Kill The Party Before 2023 Except… – PGF DG 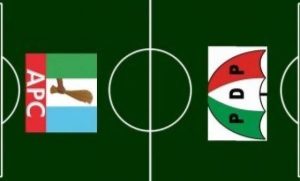 The Director-General of the Progressive Governors Forum (PGF) Salihu Moh. Lukman has warned that the All Progressives Congress (APC) may become weak before 2023.

According to the PGF DG, the strongest enemy of the APC at the moment is within the party itself, warning that the conduct of some party leaders may spell doom for the APC in 2023.

Specifically, he noted that the APC caretaker committee headed by Yobe State Governor, Mai Mala Buni must conclude its work quickly and hand over party structures to normal organs as contained in the constitution of the party.

Lukman handed down the warning in a statement on Monday titled ‘determining factors for 2023 contests in APC’ noting that the opposition Peoples Democratic Party (PDP) can only return to power if the APC implodes before 2023 due to internal fights.

He however added that if APC can manage its internal disagreements very well, then it will continue to enjoy electoral victories beyond the tenure of President Muhammadu Buhari which expires in 2023.

“How the party is able to manage the process of internal contest is now the challenge. The biggest problem in politics, which compromises both leaders and members and weaken capacity to provide generic support to candidates irrespective of who emerges is the personal ambitions of leaders for elective and appointive positions,” Lukman submitted.

He added that: “The first test of the ability of APC leaders to develop strong unity is when the party organs are able to meet and take decisions.

“This means very high potential that once appropriate organs of the party are meeting and decisions are being taken in line with the provisions of the party’s constitution, processes of electing standard bearers of the party for the 2023 elections would be acceptable. Party leaders would also accept the result of the election and support the winner.

“A factor that may be slowing down the process of ensuring that the Caretaker Committee conclude its work and return all organs of the party back to normal operations is the need for strong unity among APC leaders, and by extension members. Unity among party leaders is required to come with all the support needed by the Caretaker Committee to complete its work of returning all organs to normal operations as provided by the constitution of the party.”

The PGF DG added in his statement that as the ruling party, the APC stands a better chance of winning the 2023 elections in Nigeria but the party must bring all its members to the table to work for its success.

“The big challenge is whether APC leaders will take the necessary steps to retain all the towering electoral advantages of President Buhari, which will require first and foremost that the Caretaker Committee is able to complete its tasks of returning party organs to normal operations in line with provisions of the APC Constitution. This should be followed by allowing organs of the party to take decisions, which should be the basis for the unity of all leaders of the party.

“There is also the need to depart from the political convention in Nigeria whereby leaders relate with everyone based on estimation of support or opposition of ambitions to access appointive and elective positions. This create the problem of blind trusts, which in turn can lead to a situation whereby appointed officials of governments controlled by the party are more or less passengers.

“Taking every step to ensure that conducts of party leaders are regulated to conform to minimum standards is, therefore, necessary to ensure that all appointive officials of APC controlled government are able to develop comparative scorecards ahead of the 2023 elections. APC must take all the necessary steps to ensure that campaigns for 2023 are based on assessment of empirical evidence of performance and not perception,” the statement warned.

Meanwhile, Governor Bello Matawalle of Zamfara State has been told to be careful about wanting to dump the Peoples Democratic Party’s camp if he cares about retaining his position.

Naija News understands that a former governor of the state, Alhaji Abdulaziz Yari, gave the warning while speaking at the secretariat of the All Progressives Congress (APC) in Gusau, the state capital on Sunday, April 11 during the distribution of N1.3bn grains he bought to share as Ramadan present to APC supporters.

The politician cautioned Matawalle to carefully decides his fate, noting that he would definitely lose his seat if he leaves PDP, going by the Supreme Court’s verdict that brought him to power in 2019.