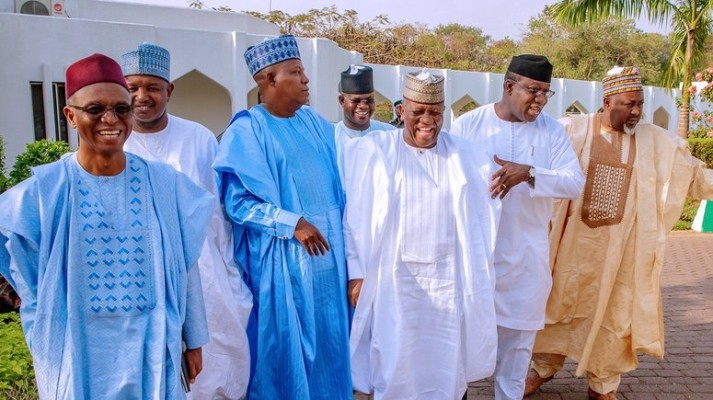 Governors of the ruling All Progressives Congress (APC) have debunked claims by Governor Godwin Obaseki of Edo State that the Federal Government printed between N50 billion – N60 billion to bridge the shortfall in the distribution of federation revenues to the three tiers of government in March 2021.

Obaseki who left the fold of APC Governors in 2020 and joined the main opposition Peoples Democratic Party (PDP) last week said, the Federal Government printed N60bn to share as part of federal allocation in March.

But replying their former member, the APC Governors under the umbrella of Progressive Governors’ Forum (PGF) said his claims did not reflect the true position of things.

The Forum, in a statement released to journalists on Sunday in Abuja, by its Chairman, Governor Abubakar Atiku Bagudu of Kebbi State, said at first, the impression it got was that it was an off the cuff remark made in a private meeting.

According to the APC Governors, they were however shocked to see yet another response from their colleague to the rebuttal by the Finance, insisting that the March 2021 FAAC was augmented via the printing of money.

The PGF said: “Given the significance of the statement from a sitting governor and the possible negative impact it has brought to the credibility of both the federal and State government in managing government finances, the Forum is obliged to put a statement out.

“To set the records clear and to the best of our knowledge, the total distributable statutory revenue for the month of March 2021 was N596.94 billion. Due to the shortfall in gross statutory revenues by N43.34 billion compared to the previous month, an augmentation was made in the sum of N8.65 billion from the Forex Equalization Fund Account, which brought the total distributable revenue to N605.59 billion.

The Progressive Governors admitted that there are periods when the country experiences significant fiscal shocks in federation revenues, but the shocks are offset by other savings serviced from the federation account, including distributions from the domestic excess crude proceeds and the foreign excess crude savings account.

“These payments started since 2008 when the country first experienced fiscal shocks from the fallouts of the global financial crisis of 2008 – 2009. As a trained Economist who has been a Governor since 2016, Mr. Obaseki is aware of all the support states have received from President Buhari in coping with the shocks that have resulted from the CoviD 19 pandemic and resulting economic recession.

“Not only have we received budget support, bail out support to meet salary obligations and infrastructure refunds to all states, this was implemented in the overall public interest without discrimination on the basis of party affiliation. This is why it’s unfortunate and disingenuous to allege preferential treatment of APC states when PDP governed states are even greater beneficiaries of all the support,” PGF said.

The forum said there was nothing exceptional in this current review of economic orthodoxy because “almost every Central Bank in the world is taking steps to support their government in coping with the effect of Covid 19 pandemic on the national economy. This has become the norm rather than the exception as all countries grapple with the deleterious effect of economic recession.”

“This unfortunate and inaccurate assertion by Governor Obaseki becomes even more worrisome when juxtaposed with the official statement released after the meeting of PDP Governors last week, calling for restructuring and greater devolution of powers to the States. It would appear that matters that require the collective resolve of all leaders are now being turned into purely partisan, point scoring claims.

“Every discerning Nigerian knows that the APC’s position on restructuring and devolution is clearly articulated and accurately captured in the report of Governor Nasir el-Rufai’s committee on True Federalism. And the APC Governors Forum has since made representation to NASS in furtherance of that position. However, since there are constitutional boundaries, we cannot usurp the responsibilities of the NASS on constitutional reform process, having made our position known.

“These are challenging times for the country. The COVID-19 pandemic coupled with the recent macroeconomic challenges, has had a significant impact on government finances, however, both the federal and state governments are working assiduously to confront the challenge through greater collaboration to increase independent government revenues, rationalize non-essential spending and improve the efficiency of public spending.

“Indeed, we are beginning to see the positive impact of these initiatives given the country’s exit from recession in the first quarter of 2021″, PGF added.

The forum said while the right to criticize and hold alternative views is acknowledged, “all state governments have been equitably treated by both the Federal Government and national institutions, particularly the CBN. The support include, among others, bailouts, special interventions and various refunds that were owed to states prior to the Buhari administration.”

It explained further that: “For example, as at June 2015, 27 states could not pay salaries but the Federal Government provided support to states to enable them to pay salaries and pensions. The federal government equally refunded the longstanding claim by states on deductions made in 2006, wrongly, to pay the Paris Club debt. Furthermore, states were refunded various amounts for roads and other projects undertaken on behalf of the Federal Government.

“In addition to the above, the Central Bank of Nigeria designed and implemented various interventions which helped in stimulating economic activity in all the states, and contributed to the country’s quick emergence from recession in 2016 and 2021. Such interventions include the Anchor Borrowers Programme, Accelerated Agriculture Development Scheme, Small and medium scale enterprises support scheme as well as expansion of pre-existing Programme such as Commercial Agriculture Credit.

“The world economy had been challenged in the last few years with fiscal and monetary authorities responding in various ways to support their respective economies. In all situations the Central Banks had responded to ease Credit and in a number of cases where interest rates were near zero, quantitative easing measures were undertaken to expand money supply to the economy.

“Given the constraints faced by the Nigerian economy, the Central Bank of Nigeria had responded commendably well while still working hard on exchange and interest rates. We urge the Governor, management and staff not be distracted. Equally we are grateful to President Muhammadu Buhari and his team for the support and partnership extended to all the federating units. In addition to occasional meetings with Mr. President, the National Economic Council, chaired by the Vice President, HE Prof Yemi Osinbajo, meets every month and all issues are discussed transparently and exhaustively.

“It would therefore be helpful to admonish ourselves as leaders to work collaboratively in tackling these challenges rather than resort to cheap and demagogic point scoring in our quest to rescue the economy.”