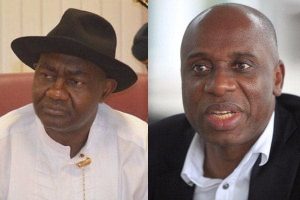 The All Progressives Congress (APC) in Ahoada Local Government Area of Rivers State has asked the Minister of Transportation, Rotimi Amaechi; and Senator Magnus Abe to settle their difference with three months or face sanctions.

Naija News reports that the decision was made during the APC extra-ordinary meeting held in Ahoada East Local Government Area of the state.

Speaking to newsmen after the meeting, the leader of the group, Ibiso Nwuche, said the ultimatum was due to the failure of the APC leadership in the state to resolve the crisis rocking the party.

He said: “Having not had any benefit from the party due to failed leadership from the state and the grassroots levels in Ahoada East, we resolved and gave them (Amaechi and Abe), till July this year to reconcile themselves at the top and move the party forward before we take next action.”

Nwuche also slammed comments by Amaechi directing the riverine part of the state to prepare and produce the APC governorship candidate to take over power in 2023.

According to the APC stalwart, that was Amaechi’s personal opinion.

He stated that the Ekeye ethnic nationality will express their interest come 2023.

Nwuche urged the minister to allow internal democracy thrive as only delegates of the party can decide who will fly the party’s flag.