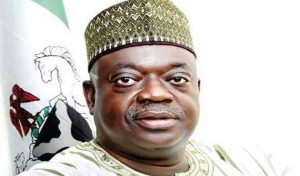 Former Governor of Niger State, Muazu Babangida Aliyu has reacted to his suspension from the Peoples Democratic Party (PDP) over alleged anti-party activities.

Naija News had reported that the PDP in the Chanchaga Local Government Area of the state on Monday suspended the former governor from the party over six weighty allegations.

A communique issued at the end of a stakeholders’ meeting in Minna, said Aliyu was suspended for allegedly working for the All Progressive Congress (APC) in 2015 to oust former President Goodluck Jonathan.

It alleged that Aliyu funded the APC in 2015 with the sum of N450 million to defeat the PDP for personal and selfish reasons.

The communique listed the allegations as causing disaffection within the party hierarchy even after several peace efforts.

But in an interview Blueprint on Tuesday, Aliyu described his suspension from the PDP as a joke of the century, saying that he is the leader of the party in Niger state.

He described the statement by a group in Chanchaga LGA announcing his suspension as laughable and should therefore be disregarded.

Aliyu noted that the group is seeking political relevance and position, urging Nigerians to beware of those who would stop at nothing to tarnish others’ image or reputation.

The former governor revealed that the party’s National Reconciliatory Committee led by former Senate President, Bukola Sarki was in Niger state about two weeks to settle the crisis rocking the party in the state.

He said, “The National Reconciliatory Committee has been to Niger state and decisions have been taken to move the party forward in the state. We should not pay attention to those who want to circumvent the peace process by engaging in frivolous and faceless activities.”