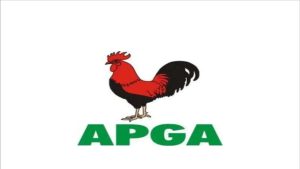 The All Progressive Grand Alliance, APGA, has condemned the attack on the former Central Bank of Nigeria (CBN), Professor Charles Soludo, in his hometown on Wednesday.

Recall that Soludo was attacked at Isuofia in Aguata Local Government Area of Anambra State during an interactive session between him and some youths.

Also, three policemen attached to the APGA governorship aspirant for November 6, 2021 election were shot dead by the gunmen.

Speaking with reporters in Owerri, the Imo state capital on Thursday, National Chairman of APGA, Edozie Njoku, described the attack on Soludo as a strange development.

He said that the attack was not in consonance with the ideological foundation of APGA, condemning the attack in strong terms.

However, Njoku appealed for calm among members, condoling with the families of the police officers that lost their lives in active service.

The APGA chairman also condoled with the Inspector General of Police, Mohammed Adamu, whose men have come under severe attacks of late.

Njoku added that the party also send their warmest concerns to the family of Soludo and all those that witnessed this dastardly act.

He said: “I have just been briefed about the ugly incident that happened a few hours ago at Isuofia, the hometown of Prof. Chukwuma Soludo, a member of our great party who intends to contest for the Governorship of Anambra State; in the forthcoming Anambra governorship election slated for November 6, 2021, in our Party All Progressive Grand Alliance (APGA).

“The entire APGA family and Ndigbo, in general, condemn this strange development in the strongest terms. We condole with the families of the police officers that lost their lives in active service. We condole with the IG of police whose men have come under severe attacks of late. We also send our warmest concerns to the family of Soludo and all those that witnessed this dastardly act.

“I shall be addressing our indefatigably and undaunted party men and women in few days to come. We must not relent in cleansing our party of men and women who trade with the collective will and aspiration of our people.

“We wish to encourage the Nigerian Police to do everything within its powers to commence full investigation so as to unravel those behind this nightmare.”

“However, it is pertinent to state unequivocally; that acts of violence of this nature are strange to the ideological foundation of APGA. They are unnatural and a total deviation from the ideals that we propagate as a party and a people. It is alien to APGA.

“I wish to appeal for calm in all quarters. We shall call a meeting to address all internal party wrangling and squabbles. We must go into the coming Anambra election as one united, indivisible and impregnable family. May our eternal slogan of onye aghala nwanneya lead the way and lighten our path this Easter Season,” he added.