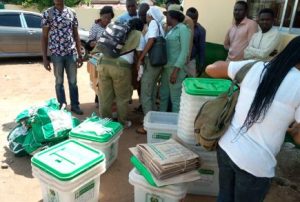 The candidate of the Peoples Democratic Party (PDP), Chimaobi Ebisike, has been declared the winner of the Aba North and South Federal Constituency by-election of Saturday.

Naija News reports that Ebisike was declared the winner around 2am on Sunday by the Independent National Electoral Commission’s (INEC) Returning Officer for the exercise, Professor Fidelis Okpata of the Federal University Ndufu Alike Ikwo, Ebonyi State.

He stated that the PDP candidate polled 10,322 votes to defeat the All Progressives Congress (APC) candidate, Mascot Uzor Kalu, who scored 3,674 votes.

It was gathered that there was a very low turn out of voters with less than 20,000 as against the about 498,390 voters expected to cast their ballots in 609 polling units spread across 24 Registration Areas (RAs) in the two Local Government Areas (LGAs) of the constituency.

Ossy Prestige of APGA was the representative of the constituency but he died on February 6.