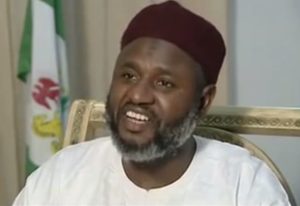 No Zoning In APC – Yerima

The former Governor of Zamfara State, Sani Yerima, has declared his intention to run for presidency in the 2023 general elections.

Yerima also dismissed claims that the All Progressives Congress, APC, has plan for zoning.

The former Governor during a press briefing in Abuja on Tuesday disclosed that he has buried his presidential ambition to support President Muhammadu Buhari on three occasions.

He added that now that the President is ending his tenure in 2023, he would contest for presidency during the general elections.

He said; “You may recall that in 2006, I declared my interest to contest for Presidency after having served Zamfara State for a period of eight years.”

“However, I decided to withdraw for the current President at that time and since then I went to Senate for three terms. Now that Mr President is completing his second term, I decided to try again to see what God will have for me having voluntarily decided not to go to the Senate again.”

“Every politician who is participating in the current democracy knows that the Constitution of Nigeria has spelt out what he has to do as President, Governor, member of National Assembly or State Assembly. Some people try to say that this Constitution is not a Nigerian Constitution but I believe that however, in whatever manner this Constitution came about whether by military dictatorship or arrangement or by constitutional conferences, we now have a Constitution that we operate as a democratic country since 1999.”

“You see, I don’t think there is anything like agreement. You can ask Mr President, he led the group, Asiwaju was there, I was part of it, there was no meeting I didn’t attend or any meeting that I attended that there is such agreement. Agreement can’t be verbal, it has to be written.”