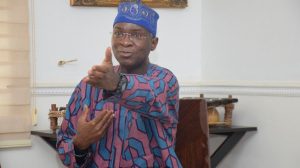 Babatunde Fashola, the Minister of Works and Housing, has called on the ruling All Progressives Congress (APC) to respect its zoning agreement ahead of the 2023 election.

Naija News reports that there have been calls by various individuals and groups for the APC and Peoples Democratic Party (PDP) – Nigeria’s major political parties – to zone the 2023 presidential ticket to the south.

Speaking to newsmen in Abuja on Tuesday, Fashola said that although the issue of zoning was more of gentlemen’s agreements, it behoves on parties who entered into such agreements to honour them.

However, the minister, a former Governor of Lagos State, admitted that Nigeria’s constitution does not support zoning.

“But the Constitution that sets up the climate of political parties’ formation does not prescribe zoning. The truth is that what makes an agreement specification is the honour in which it is made, not whether it is written. If it was written there would be no Court cases of breach of contract because it’s a document that is written and signed that goes to court.

“But the private agreement you make with your brother and sister can be breached, (it) is honour,” Fashola said.