2023 Elections: Perfecting Times for the Next Century 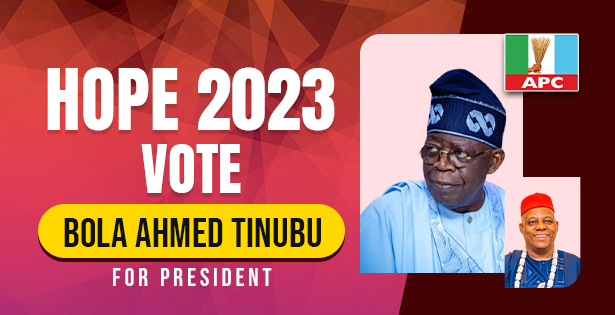 The Just Man for the Job

When a nation is in chaos and people don’t seem to know what to do to avert various catastrophic events, they start to seek answers. Answers are not gotten from a weirdo – rather answers are gotten from a hero who has proven to have delivered based on results from past accomplishments.

Bola Ahmed Tinubu is a man with multiple answers to a chaotic situation. Foresight is very important when leading a group of people to a destined place. Bola Ahmed Tinubu does not only have the foresight but the road map to the promised land.

Benefits from past administration as Governor of Lagos State

We can recall in 1997 when Bola Ahmed Tinubu spread out his ambition for Lagos State to change the story. That story he changed has become a major experience for everyone living in Lagos State today. Bola Ahmed Tinubu came into office in 1997 and brought about a change in education, health, security, and empowerment of youths and women to make the Lagos State system work. While the story continues, Bola Ahmed Tinubu during his time as Governor made non-indigenes benefit immensely from many of his initiative programs such as;

The Bola Ahmed Tinubu movement is here to stay and it is our duty to harness the power which it brings to change lives, and grow our economy, so we as a nation can push for exponential growth. The time is now and we can no longer wait to get it right. The sooner the better it would be for every to embrace the future by just embracing the truth. The just man for the job,” Bola Ahmed Tinubu”.

If Elected, Tinubu – Shettima on Economy

The Visionary with an Agenda and Purpose for a Better Tomorrow

Why Presidential candidates’ manifestos do not excite us, by OAL

No one can stop 2023 general elections from holding – NSA