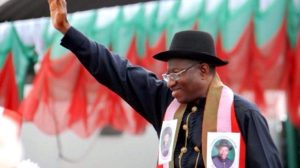 The Northern Youth Leadership Forum (NYLF) has asked former President Goodluck Jonathan to perish the thought of contesting in the 2023 presidential election.

Naija News reports that there have been rumours in some quarters that the former president was plotting to contest the election.

Jonathan who recently received some governors of the All Progressives Congress (APC) had stated it was too early to discuss the 2023 election.

But speaking to newsmen in Adamawa State on Tuesday, the Northern youth forum said Jonathan acquitted himself well as president, especially by humbly conceding defeat in the 2015 election and ensuring smooth transition to the present government.

National Chairman of the NYLF, Elliot Afiyo stated that the odds are against the former president.

He recalled that Jonathan rejected an agreement he had with the North when he contested and won the 2011 presidential election.

Afiyo stated that the insurgency which Jonathan fought but failed to curtail is still a challenge even under a northern president.

“You remember the difficulty of the Jonathan Presidency over the Boko Haram insurgents. He was even accused of deliberately encouraging insurgency to undermine the North,” Afiyo said.

Speaking further, the chairman of the NYLF urged the APC to zone its presidential ticket to the southwest to compensate the region for supporting President Muhammadu Buhari.

He warned the ruling party against zoning its ticket to the Northwest in 2023.

Meanwhile, the National Executive Committee (NEC) of the APC on Tuesday approved the granting of waivers to new members to contest party primaries ahead of the 2023 elections.

This online news platform reports that without waivers new party members would have to wait for two years to be able to contest party primaries.

The NEC also condemned the call for the resignation of Buhari by the Peoples Democratic Party (PDP) and their allies.

The ruling APC asked opposition parties in the country and all stakeholders to join hands with the Buhari-federal government to tackle insecurity.