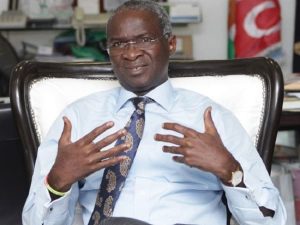 It was gathered that the questioning was related to the corrupt practices tied to his questionable asset declaration and an ongoing probe of Babatunde Fowler, the former chairman of the Federal Inland Revenue Service (FIRS).

Two senior EFCC officials told PeoplesGazette that the former Lagos State governor was interrogated after detectives were tipped off about his involvement in Fowler’s loot during his days as the head of Lagos Inland Revenue Service (LIRS) and most recently at the FIRS.

It was gathered that the anit-graft agency also wrote to the Code of Conduct Bureau (CCB) seeking the Buhari Minister’s asset declaration documents in order to further establish another phase of the investigation.

The sources revealed that Fashola strongly denied all charges of corruption, urging EFCC officials to ensure a thorough investigation of the matter before dragging his name into it.

The former Lagos State governor’s visit to the EFCC towards the end of 2020 has been kept entirely secret until now. Even then, little has been uncovered about the overall nature of the investigation, and specifics of what the works minister was accused of are still fuzzy.

But the mere summoning of a top administration official who handles a key ministerial position prompted suspicion amongst anti-graft officials that a cabal of other appointees and associates of the president may be seeking the former Lagos governor’s rapid fall from grace in order to delist him from 2023 presidential equation of the ruling APC.