2023: Buhari Not Convinced Tinubu Is The Right Successor – Minister 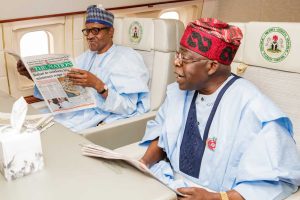 A minister under President Muhammadu Buhari‘s administration, on Tuesday, disclosed that the President is not convinced that the National Leader of the All Progressives Congress, Bola Tinubu, should succeed him in 2023.

The minister who spoke with DailyTrust noted that the president had not hidden his position that he is not supportive of Tinubu’s presidential ambition.

A member of the president’s family stated that there are plans to convince Buhari to support a candidate who would protect his interest when handing over power in 2023.

The last time the former Governor of Lagos State met with Buhari was on January 7, 2020, when he visited the State House, Abuja.

Despite the outbreak of COVID-19 the President has met with top members of the party, however, is closeness with the National leader of the party has reduced.

On Monday, he met with former Governor Gbenga Daniel and ex-Speaker of the House of Representatives, Dimeji Bankole.

On Tuesday, the president met with Governor Samuel Ortom of Benue State.

Though Tinubu is reportedly out of Nigeria, the distance between the two leaders has been interpreted as a manifestation of a rift between his camp and President Buhari, with the 2023 presidential election as the bone of contention.

Meanwhile, former Speaker of the House of Representatives, Hon Dimeji Bankole, has justified his recent defection from the African Democratic Party (ADP) to the All Progressives Congress (APC).

In an interview on Monday with journalists after meeting with President Muhammadu Buhari at the State House in Abuja, Bankole said he joined the APC to rebuild the country.