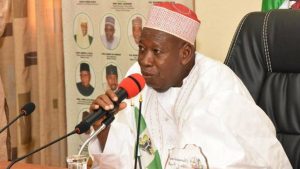 The Kano State Governor, Abdullahi Umar Ganduje has expressed worries that the ruling All Progressives Congress (APC) may split if matters that need attention are not resolved.

Speaking ahead of the 2023 general elections in Nigeria, Ganduje declared that the many political structures that came together in 2014 to form the APC still see themselves as they were originally rather than what they became after the merger.

He noted that seven years after the merger that brought the APC to power in 2015, the party is still a mixture of political parties struggling to see themselves as one.

Ganduje who spoke on Monday at a town hall meeting organized by the APC Constitutional Review Committee of the northwest geopolitical zone held in Kano said the expected unity and solidarity that is expected in the party is yet to be established.

He however expressed optimism that such issues can be resolved by the efforts of the committee and all APC members can come onboard to work together for the party’s progress.

Ganduje said, “APC as a party started as a mixture of ACN, ANPP, APGA, PDP, CPC…You see that is a mixture of various elements trying to make a compound.

“But, unfortunately, up till now APC is still a mixture and has not graduated to the next level to become a compound.

“Those who read Chemistry, know the difference between a mixture and a compound. A mixture is something that you can easily separate its particles if you use ions, while in a compound, any part you remove it will still be the same.”

Also speaking, the Chairman of the review committee, North West zone, Dr. Tahir Mamman noted that the committee is committed to the efforts of reconciling all aggrieved members so that APC will continue to be the ruling party in Nigeria for the foreseeable future.

Meanwhile, the Director-General of the Progressives Governors’ Forum, Salihu Lukman, on Monday, said failure to organize the national convention of the All Progressives Congres in June would spell doom for the party.

The tenure of the Caretaker/Extraordinary Convention Planning Committee’s led by Governor Mai Mala Buni would end in June when a national convention is expected to hold.

There are speculations that the convention would be shifted and the tenure of the committee would be extended for the second time.

In a statement on Monday in Abuja, titled: “APC’s Litmus Tests”, Lukman said the Caretaker Committee should not abuse President Muhammadu Buhari’s confidence by delaying the convention.